The grassy strip of land that sits in front of Town Hall is often known as Monument Mall. The area showcases monuments dedicated to the citizens of Braintree who served in American Wars-beginning with the Civil War and progressing all the way to include the U.S. conflicts in Iraq and Afghanistan.

The Civil War monument, the first within the “Mall,” was designed by J and H Billings of Boston. It was dedicated on June 17, 1874.

The Mall is also home to a 100 year time capsule to be opened in 2076. The Time Capsule Cairn, which is an above ground time capsule, housed in steel and stone, contains hundreds of pieces of bi-centennial American memorabilia. 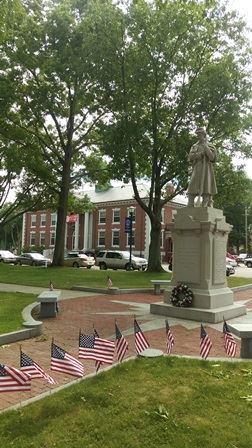