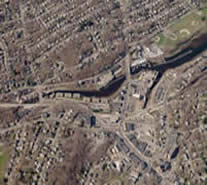 Mayor Joseph C. Sullivan along with the Braintree Planning Board submitted proposed zoning for a new zoning district in the Town of Braintree. The district known as the "Braintree - Weymouth Landing District" as shown on the accepted zoning map (PDF) is accompanied by a new zoning section (BWLD) including amendments to sections within the existing zoning ordinance. View the adopted Braintree zoning ordinance (PDF).